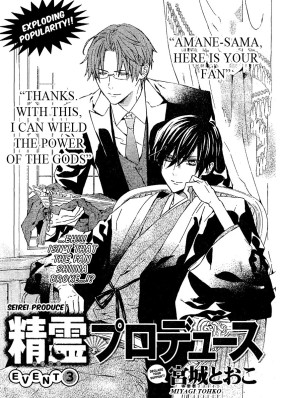 Update — July 5, 2010:  Eep!  It looks like I missed a small dialog bubble on page 24.  It’s an insignificant piece of dialog (“gah”), but I went ahead and added it.  The file has the same name, so the link below is still valid.
————————————-
Here is “Seirei Produce” chapter 3 (and no I wasn’t joking about “strip rock-paper-scissors”).  In this chapter we are more formally introduced to the kitsune character (though we don’t learn his name).    We also get to see a new side of Gojou’s character.  After this chapter I can’t decide who is my favorite character.  Hmm…perhaps I’ll make a poll…Anyhow, here’s the link:

After reading the chapter, take the poll. (I will put it back up tomorrow — seems to be broken today).  Here are some of my thoughts on the Seirei Produce characters:

Amane:  He’s like a baby God.  He believes everything is his and he’s more important than anyone else.  Sometimes I wonder whether he’s actually insane because it seems that he has yet to do anything truly supernatural.  Either way he’s adorable because he’s so naive and I like how single minded his ambition is.

Shiina:  I love her spunk!  I like the way she rolls with the punches and at the same time puts Amane back in place.  It seems within this chapter we see that Shiina is super human.  It makes me wonder what she really is and who’s her daddy…I’m gonna laugh so hard if he happens to be the ruling God in heaven who gave Amane the fan.  That way it would make sense that she could break the seal.  It could also mean that Shiina’s mom isn’t joking by calling her “The God of Destruction.”

Gojou:  He’s very mysterious.  Is he a god or an angel or something else.  He’s actually quite humorous.

Chisa:  She’s Shiina’s youthful looking mother.  Like Shiina, she adaptable.  She’s very flighty and a little too easygoing.  I like the random crap that spews from her mouth.

Kitsune:  He’s quite full of himself and speaks nonsense.  I’m looking forward to seeing his personality unfold more.

Next up are a couple of one-shots, “Bouquets of Flower for the Sleepless Knight” (it’s a beautiful, funny, action-packed tear jerker.) and “The Timid Scarecrow Familiar,” and “Orange Chocolate” chp 15.