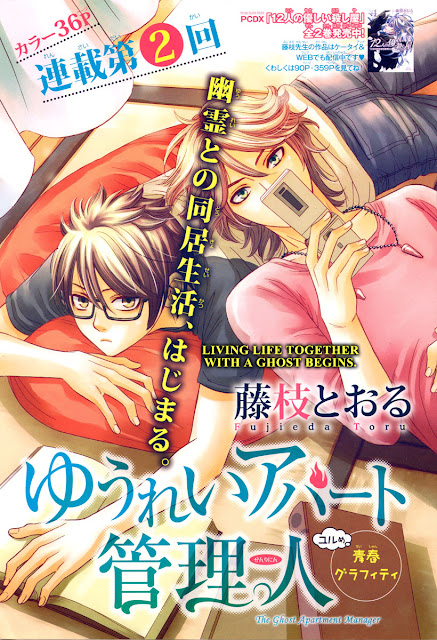 Here is “The Ghost Apartment Manager” chapter 2.  This is another introductory chapter.  In chapter 3, things really get started with the introduction of a lot of characters and the general story mechanic.  I think many of you will be surprised by the route the story will take because it seems so low key now.  For now though, Sekka and his interactions with the two ghosts are lots of fun.
Links to “The Ghost Apartment Manager” chapter 2:  (Zip) (PDF)
Spoiler Alert! Spoilers Ahead!
My Thoughts on the Chapter:
I really felt for Leo in this chapter.  It’s hard to come to terms with the death of a child and it’s kinda neat to see it from the child’s side.  As a ghost, it’s tough for the child to deal with missing childhood and the best parts of growing up in high school.  Leo probably would have been a popular guy and enjoyed school.  It’s sad that he won’t get to fully experience it.  I’m happy that he has Sekka to live vicariously through, though, it’s a pity that Sekka is a shut-in.  Hopefully Leo will push him toward a more fulfilling high school experience.  Leo’s methods, though, are a little devilish.  There is a little strangeness about Leo.  He seems a little possessive of Sekka, but I wonder whether it’s an attention thing or whether it’s over-protection.  Leo seems to really regret his own death and perhaps he wants to make sure Sekka doesn’t die too.
Souichi — He’s nice comic relief, though, I would have never guessed that he was a player ;p.  Hahaha!  I had to pause and laugh for a few minutes after translating the page where Souichi tells the story of his death.  He’s so proud of it.
Up next is our winter-to-spring transition one-shot “World End Garden” follow by a SURPRISE if I have time to get it out before Aria 5 arrives ^^ — Heheh! *Grinz*