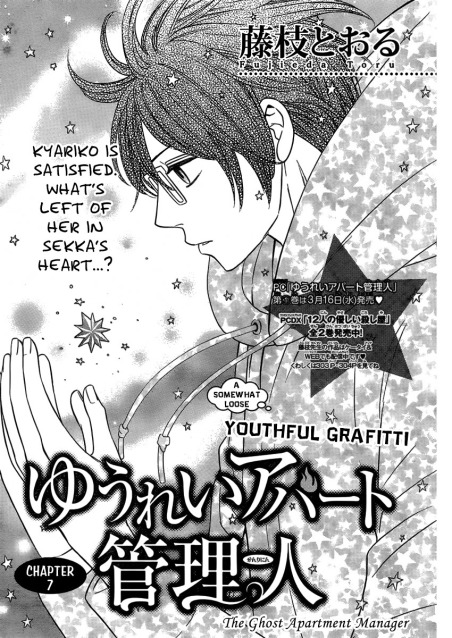 This chapter bids a final farewell to Kyariko, raises questions about Leon’s true natural and status, and deals with Sekka’s emotions around Kyariko’s passing.  It’s a nice transition to next ghost’s arc and as usual, the story thoughtfully and delicately deals with Sekka.  He’s such a sweet boy.  Onto the link!

My Thoughts on the Chapter:

I love that mangaka manages to make Sekka a full fledged emotional character without making him effeminate or super-aggressive.  I completely understand why he became at shut-in.  It can happen to sensitive people.  Anyhow, Sekka is opening up to the other ghosts and he’s seems to understand his duty as a medium to help the ghosts pass on.  I wonder, though, when Sekka will start making friends in the living world.  Sure he’s made a connection with Hashimoto, but that’s not the same as making a connection with someone his own age.  I don’t think Leo can pass on until Sekka becomes a full member of the living world. Anyhow, I really like Sekka and I’m cheering him on!

Leo — he’s in danger, but what is the danger and what’s truly going on with Leo.  Did he know the ooze creatures would come after Sekka before he invited Sekka to live with him?  What would happen if the ooze creatures captured Sekka?  Why can Sekka see ghosts? Is there something about Leo’s death that sets his ghost up for a crueler fate than the rest of the ghosts in this story.

This series is currently at chapter 11.  Next up is Crook, and I promise a lot of 2D crushed on Crook/Sekka and there’s some LOVELY color artwork coming our way too :).
————
Next up is “The Scarecrow of Oz” Chapter 4!