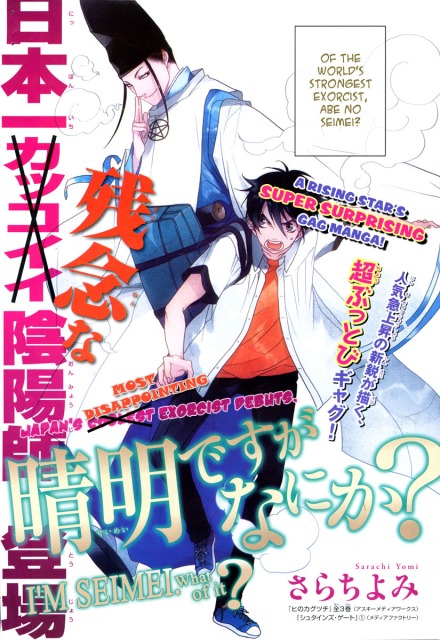 WAH-BAM!  It’s another one-shot!  This one is a “Shounen for girls” type of one-shot.  I wanted to release this one over a year ago, but it kept getting kicked down the road.  I’m happy we finally finish this one.  Big thanks to Blotty Parchment for taking on the challenge of translating this one-shot.  There were a lot of exorcist terms she had to research.  On top of that, there are language differences between Shoujo and Shounen manga.  It can be a little tough for folks like us who aren’t native Japanese speakers.  Also, thanks to Sapphire Pyro for the beautiful typesetting.

I was originally going to release this one-shot on Bakeneko’s Lair, but when the translation and English adaptation were completed, I felt that the overall story had a sweetness running through it that was more appropriate for Omari’s Sister than Bakeneko’s Lair.  Anyhow, I love sweet stories about father’s an sons and the awkwardness of sons doing their best to distinguish themselves from their fathers.  I imagine, though stories like this, that it’s tough being a boy.

And now onto the links!

Next up!
We have two more one-shots that are close to being done, so look out for them sometime this week.  Otherwise, we will now turn our attention to our series.  Thank you all for being patient with us while we “cleaned our one-shot closet”.  I don’t know what’s up next.  It’s depends on what redraws I get back :).  Also, another one-shot or two may still come out this month…so look out for them!

Please check the release schedule track our progress on various releases and follow our release feed on Twitter (@OmarissisterRel) to be alerted when we do a chapter or a one-shot release.