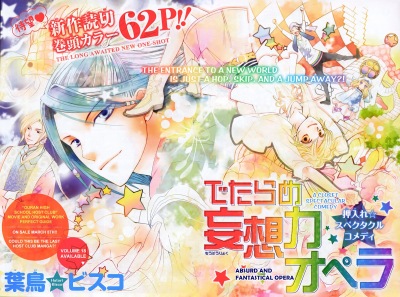 This one-shot took forever to complete!  Everything about it was time consuming!  I’m so glad it’s done!  I forgot how difficult Bisco Hatori’s works are to translate. Fortunately,  I really like this one-shot so it was a pleasure.

According to Hatori-sensei’s blog, this was intended to only be a one-shot, but she liked it so much that it’s going to become a 3 chapter short series!  The second chapter is scheduled to release in Lala issue 5, which comes out in Japan on March 24th.  We will, of course, translate the rest of the series.

My thoughts on this one-shot:

The two main characters remind me of Tamaki and Haruhi, which I expected.  It’s hard to come off of 9 years of a story and characters without having some “residue”.  I don’t mind this, though, because I like Tamaki and Haruhi and their relationship.  The other characters are somewhat new and that’s refreshing.  I wanted to map Ouran characters onto them, but in the end, I didn’t feel the link.

The magic premise of the story was a little hard to grasp during the translation process. Hopefully, I managed to “decode” things such that it’s understandable.  I decided to use “figments” instead of the generic “particles” or “matter” because it seemed to fit in more with the idea of imagination and dreams.  Also, as a former Disney-nut, I love the purple dragon “Figment” and the “Journey Through the Imagination” ride at Disney World.  (The theme song for that ride is very cute and singable — “Imagination! Imagination! A dream can be a dream come true, with just that spark from me and you.”).  Anyhow, to me “figment” seem to be a really good way to convey the idea of the magic.

I have no idea what could come next in the story, other than deal with the corrupt politician…but Bisco Hatori doesn’t always do what’s expected, so we’ll just have to wait and see :).

Next up will be our Valentine’s Day one-shot, Magnolia, and the latest one-shot from Nari Kusakawa!