First of all that was an extremely long wait!  And 52-pages was a lot of translating for me.  Fortunately, the print quality of that section of the magazine was excellent, so the pages were easy to clean.  Speaking of the quality, one thing I did notice is that a lot more care than usual was given to the drawings themselves.  There were some nice shadows:

And some all-around fine drawing:

It was a real treat to prepare the images for this chapter.

Onto the story itself.  Taken on the whole, I liked it, though, I thought it was a little long.  Finally, both Haruhi and Tamaki confess to one another and as expected, in the end, Haruhi is the rational one who screws Tamaki’s head on.

I didn’t like the early on thrash in which Haruhi tries to take back her confession after Tamaki goes stupid.  Before continuing on, let me say I called the cliche of Tamaki not being able to hear Haruhi initially over the jet engine noise.  I was hoping that wouldn’t happen, but it did.  I was also hoping at that moment Tamaki would go stupid in a different way.
I’m not sure what I was expecting, but I thought after the ordeal he went through with his grandmother, Tamaki would be somewhat more mature.  I guess, the baka-ness I was expecting was for the kiss followed by an out-of-the-blue marriage proposal that would have set Haruhi off about how stupid he is.  Still, the little part about Tamaki yelling out to Hikaru and Haruhi’s reaction was funny.

The kiss scene was very nice and just the kind of decisive and mature act that I wanted Tamaki to make: 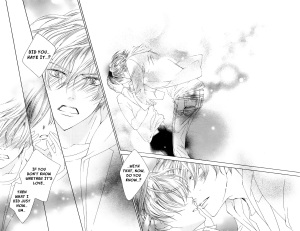 I also liked the little bit where the club members rally around Hikaru to support his loss in love.

Onto the re-opening of the Host Club.  I wasn’t really expecting this.  I would think that after settling his heart upon Haruhi, the idea of entertaining other ladies would be the last thing on Tamaki’s mind.  I thought he would be instantly doting and driving Haruhi crazy trying to make up for lost time.  Not only that, though, as a girlfriend, Host Club would be a big no-no.  Seriously, Haruhi is far too saintly.  I was happy to see the twins point out this inconsistency.

Now on to the most interesting part, at least for me…it happens to be the little part were the girls and Renge are discussing what role in Greek Mythology Haruhi is playing. In one she’s Adonis and in the other she’s Hyacinthus. In both cases, her loss is sorely missed by the Tamaki character and the Haruhi character dies as a result of jealousy or a dispute between between two
Gods. In the Aphrodite and Adonis myth, to settle the dispute between Aphrodite and Persephone, Adonis spends part of the year with Aphrodite and part of the year with Persephone. In the Apollo and Hyacinthus myth, Hyacinthus is killed by a discus that Apollo throws, but is blown wayward by Zephyr (who Renge indicates is Kyouya). Hmmm…I wonder could this be some foreshadowing about Haruhi’s decision to study abroad…

And back to Baka-Tamaki trying to plan a date.  Meh…the magic bit fell flat on me.  Thank goodness we can count on Haruhi to reign in the baka-ness.  I particularly like the last page.  I think Tamaki’s expression as he teases Haruhi is priceless. 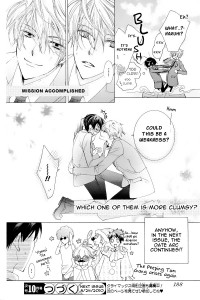 And so now we all wait a month for the first date.  I’m fairly sure that Tamaki won’t be cool, leaving Haruhi to be cool for them both.  As for Haruhi’s decision about studying abroad, I don’t know if her answer will be revealed next chapter.  My guess is that it will be the cliffhanger to end the chapter.  I think, though, that she will decide to study abroad based on the foreshadowing from the Greek Mythology cosplay and also because she discussed the matter with Kousaka and we know that Kousaka thought it was a golden opportunity.  However, where does this leave chapter 83? Regardless of Haruhi’s decision, wrapping the story up just after the first date seems a little rushed.  I really do hope there is a follow on or spin-off series that follows at least Haruhi, Tamaki, and Kyouya into adulthood.  There’s a lot of their story left unfinished.  Of course after Kyouya and Tamaki graduate, it can’t be called “Ouran High School Host Club” anymore, so…sigh…I’m keeping my fingers crossed on this one.