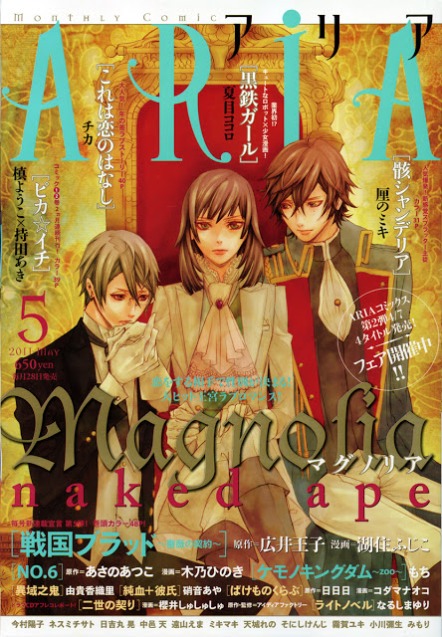 Take a good look at the cover of this month’s Aria magazine.  It’s so pretty!
I’m gonna call March over two days ahead because the next two days I will not be doing much manga-wise.  It’s ;p and

at the same time. Hahaha!  Darned that real life of mine!

First an announcement for “Junketsu + Kareshi” fans, of which I know there are many of you and I know initially this is going to upset you…but I’m doing what’s best for the sake of the story’s continuity and everyone’s sanity (including my own).  Shouoto-sensei is taking a month off, so J+K chapter 10 will not release until late May in Aria 7.  After taking a look at chapter 9, I’ve decided that where it left off in chapter 8 is less agonizing than doing chapter 9 now and leaving you all and myself hanging off the edge of a nasty cliffhanger for 2 months.  So instead we will do a J+K chapter 9 and 10 double release late May/early June instead.  Trust me, you will thank me later for doing it this way.

Now that that bit of business is done, here’s what we’ve got planned for April!

There may be some changes to this plan depending on whether we decide to translate “3 Hearts”.