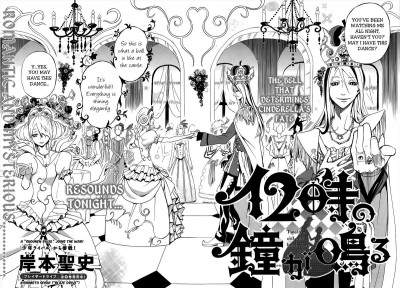 We had originally planned to release this one-shot a little over the week ago, but there was a duplication with Turtle Paradise so I cancelled it even though it was almost ready.  But we talked it over within the group and received some encouragement from Turtle Paradise and, as a result, I decided to go ahead and finish it and release it.  Suzume, Ichigo Stars, and I spent too much time cleaning and redrawing the images to let the work go to waste.

This one-shot is more about the artist style than the story for me, although the end is pretty funny, even though it’s gruesome.  The English adaptation is somewhat different than Turtle Paradise’s so our version may have somewhat of a different feel.  This version is benign in comparison in my humble opinion.  I. personally, enjoyed the “bite” of the Turtle Paradise version.   Regardless, it’s always interesting to see how different people choose to adapt the same work.  There are many ways to say the same thing :).  And now onto the links!

Up next is Magnolia Chp 11!