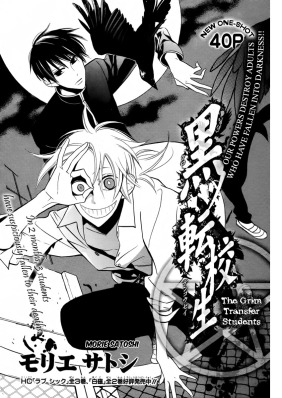 Here is our second Halloween one-shot.  I’ve been holding onto this one for about a year.  It came out just after Halloween last year, so I waited an entire year to put this out at the right time.  The title of this one-shot is “Kuro Tenkousei” or literally, “The Black Transfer Students”. To my American ear, that title sounds very wrong and totally misleading, so I decided to use a synonym for black that captured what the story is truly about.  The word “grim” seemed to fit best, so “The Grim Transfer Students” it is.

I was originally going to post this to “Bakeneko’s Lair” because it’s not very shoujo-y and it’s kinda freaky.  But I did release “The Doll Rebirth Workshop” on OS, so…I figured this was in line with that kind of freakiness and psychological drama.  Anyhow, the villain in this one-shot is bat-sh** insane.  I think that’s what drew me to this one-shot.  It seemed very out of place in “The Hana to Yume” magazine.  Beyond that though, there is a nice underlying of friendship between the main male characters.  I really like the dark haired boy, Atori :). And now onto the links:

Some thoughts about this one-shot
I don’t like adults either who think they know what’s best for children who aren’t their own.  My parents weren’t the type that shielded me.  They felt it was important for me to experience life and to draw my own conclusions, so anyone touting the argument “it’s for the children” is offensive to me and quite frankly, I don’t understand those people.  Haha!  I know that sounds weird considering how constrained Omari’s Sister is.  But it’s more of a branding issue than censorship.  People come to OS with certain expectations and that’s what we deliver.  Folks wanting other kinds of manga are free to find that content on other websites.  That is also why I set up Bakeneko’s Lair as an offshoot for content that lies outside of what OS does.

As for Ayabe — uh…I think she the scariest villain in all the OS releases.  I really don’t lie her.  She hella creepy.

Up next…We will release the teaser preview of our newest series “Ore to Atashi no Kareshi” and to work on the last chapter of “The Scarecrow of Oz”.   We’ll see…I vowed to myself to do some housework this weekend and to dig out from under the mail in my office,