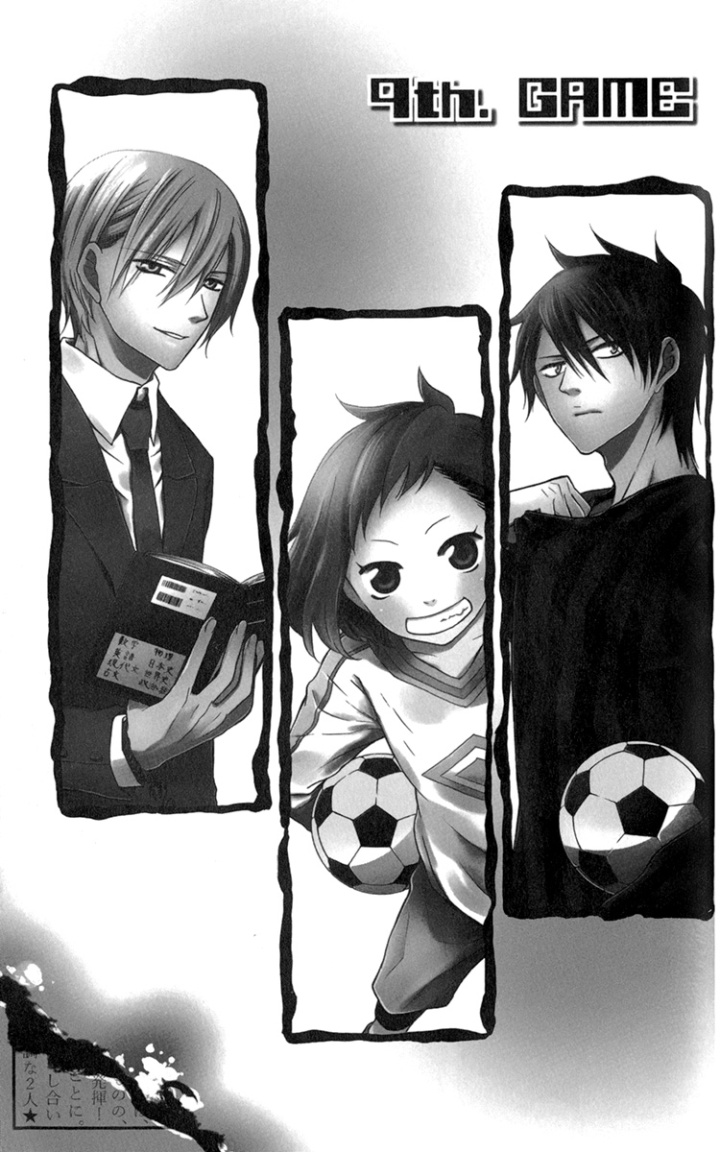 Note: I didn’t have enough brain to write a more “novelized” version of this chapter. Sorry. I’ll try harder next time.

Rina fits a wig onto Hayate’s head while Hayate complains about the pain. Rina tells Hayate, “Tolerate it for fashion’s sake! This is a woman’s battle armor!! There’s not a man alive who wouldn’t be happy to see a woman all dolled up, after all!” Rina then looks at the clock and panics. “Augh! We’re running out of time! Hurry up, Hayate!” she shrieks.

A few days ago, Rina won amusement park tickets in the shopping district’s raffle and she asked Hayate, Yuuto, and Youichi to go with her. Today, the soccer club is taking a break from club activities, so off to the amusement park the four go!

Wearing their street clothes, Youichi and Yuuto arrive first and greet each other with a bow. As they wait outside of the amusement park, passing girls eye the handsome pair.

Hayate runs to meet up with everybody. Unlike usual, her head is heavy and her thigh-high stockings rustle as she runs. Hayate is wearing a fluttery skirt, the first one she’s worn other than her school uniform. She wonders if Yuuto will be surprised, especially since she’s wearing a wig.

When Rina and Hayate arrive, Youichi is visibly surprised and Yuuto’s cheeks flush. 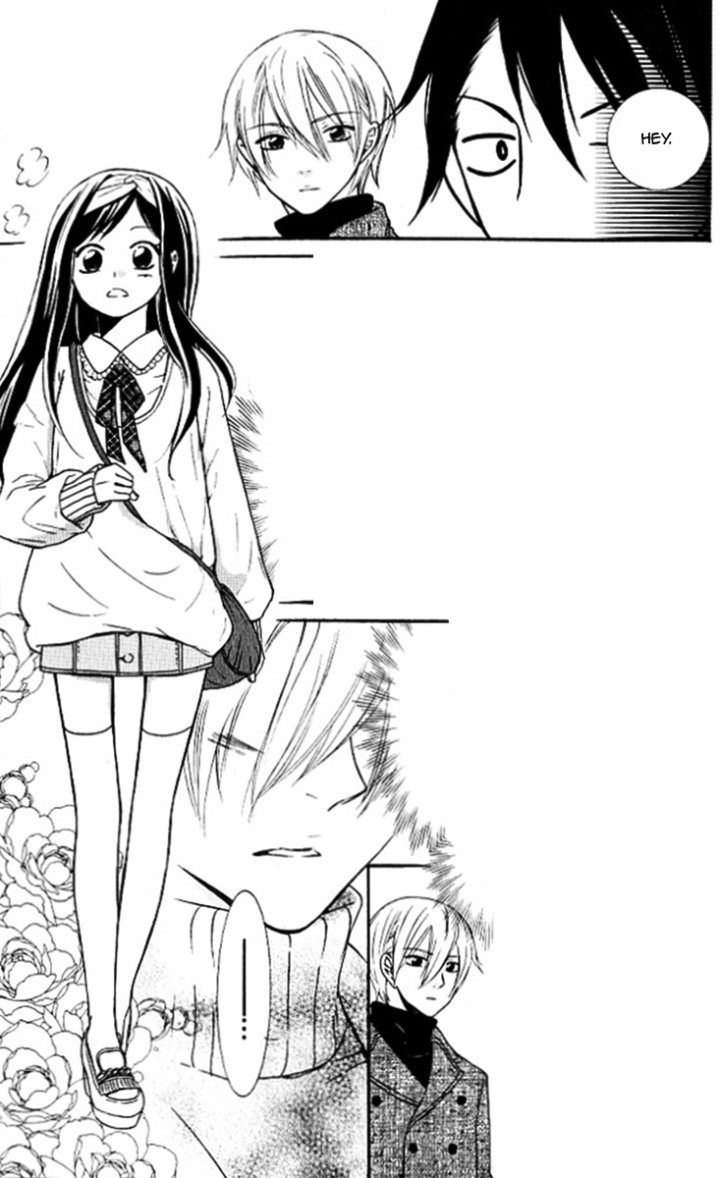 Hayate thinks the outfit will repair her reputation after what she thinks was a disastrous Valentine’s Day. Hayate asks whether she looks weird and Youichi immediately affirms that she does look weird and then without thinking, grabs her hand and starts running.

Away from the others, he asks her what’s with her hair and Hayate says his looks weirder. Rina asks Yuuto if he’s jealous of Youichi’s and Hayate’s closeness. He says that they’ve been close friends since elementary school and then takes the time to thank Rina for the tickets. Rina thinks Yuuto’s politeness is princely.

Hayate doesn’t understand Yuuto’s reaction to her outfit and moves on think about how fun the day will be because she believes Yuuto’s never been to an amusement park because he studies all the time.

As they are deciding what to ride, Yuuto seems aware of other guys noticing how cute Hayate is, but Hayate is clueless and being rambunctious as usual as noted by Rina. Yuuto says he has no preference for what they ride first. Hayate doesn’t know why Yuuto appears to be preoccupied as he moves to shield Hayate from the eyes of other guys.
First they go on a river rapids ride and Yuuto drapes his jacket over Hayate’s lap so she won’t get wet. After that, Yuuto continues to cover up Hayate on every ride.

They make their way to the carnival game section of the park. There’s a soccer ball kicking game which Hayate and Youichi think is the game for them. As Hayate charges off, Yuuto grabs her arm to pull her back. Hayate reassures him that she’s wearing shorts under her skirt.

Meanwhile Youichi’s scored himself a watch. The flames of competition arise in both Yuuto and Hayate. Some boys standing in the area around the game audibly question whether Hayate is going to play the game in a skirt. Yuuto covers her again and tells Hayate he’ll play the game in her stead. He thinks she wants the gift basket full of snacks, so he aims for it and, of course, wins. Hayate fumes because it was supposed to be her win, which is not the reaction Yuuto was expecting. Despite this, Hayate double fists the popcorn and Yuuto looks around again, aware of other guys looking at Hayate. She mistakes it for him not having fun, and then she realizes that Yuuto is preoccupied with her outfit.

Rina suggests that they go to the haunted house attraction next. Hayate thinks that she can finally redeem herself and goes marching off in front of Yuuto. She thought it was going to be fun, but Hayate feels that she’s messed up again. Yuuto grabs hold of her hand telling her that there’s a defined route.

And then Hayate hears Rina screaming and runs into the darkness to save Rina, leaving Yuuto behind. As she’s running, Hayate wishes that she was wearing sweats, and in the darkness bumps into Youichi and tears her skirt. And now Hayate’s upset about ripping her skirt and doesn’t want Yuuto to see it.

Meanwhile, Rina and Yuuto are outside. Rina profusely apologizes to Yuuto. Yuuto asks if she saw Hayate, and Rina is confused because she didn’t know Hayate went missing. Yuuto gets Rina a drink and asks if she’s calmed down. Rina says she thought Hayate exited the haunted house before she did. And then out comes Youichi princess carrying Hayate. 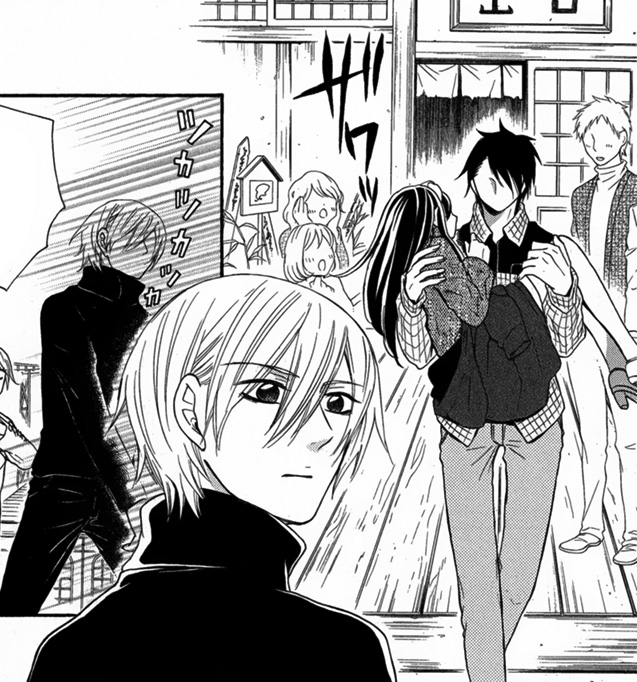 Irked, Yuuto strides over get his girlfriend. Hayate, dense as ever, tries to get out of Youichi’s arms so she can run away from Yuuto. Youichi passes Yuuto without stopping, saying he’s taking Hayate to a room where she can change clothes. Yuuto promptly turns and tells Rina that he’s going to buy Hayate a change of clothes. Rina says she’ll go with him, but Yuuto tells her to stay with Hayate. Rina insists that she must go with him because she knows Hayate’s size. On the way, Rina explains that “Rina” is her nickname.

Meanwhile in a locker room, Hayate feels gloomy about her torn skirt. She explains to Youichi that she was supposed to redeem herself and that her clothes were her battle outfit. Youichi pinches her cheeks and reminds her that she was fine up until now because she’s used to being covered in mud and wearing torn clothes while playing soccer.

Rina and Yuuto return mid-squeeze. Rina screams and asks what the two of them are doing and then tells Youichi to go outside so Hayate can change. Outside the two guys guard the door. No words pass between them. Yuuto thinks about Youichi princess carrying Hayate and decides to break the silence. He point-blank asks Youichi, “Do you like Hayate?” Youichi does a spit take and says, “What the hell? Not a chance!” But at the same time, Youichi tells himself that he doesn’t want to think about that question. Yuuto responds, “Good”. Youichi, again talking to himself, calls Yuuto an ass.

And then out comes Hayate… dressed in a plush dinosaur suit.

Youichi can’t help but laugh and asks if she’s going to be in the amusement park’s parade and tacks on that the suit is for children. Rina explains that it was the only outfit the gift shop had. Then Hayate, feeling embarrassed, runs off the next ride. And Youichi tells Yuuto that if it pisses him of, then don’t come along.

The last ride they choose is the ferris wheel. Youichi calls for Hayate to get on, but Yuuto grabs Hayate instead and pulls her into a separate car than the one Rina was put into, leaving him alone with Hayate and Youichi alone with Rina. Yuuto gives Hayate a stern look. Hayate wonders what’s wrong.

Meanwhile Rina’s gloomy. She’s happy about being alone together with her crush Youichi, but at the same time, the situation is awkward. Rina’s head is in her hands with frustration. Misunderstanding, Youichi asks if she has a headache. And then he asks, “Marina, aren’t you going to look at the view?” He called her by her real name. Rina blushes. 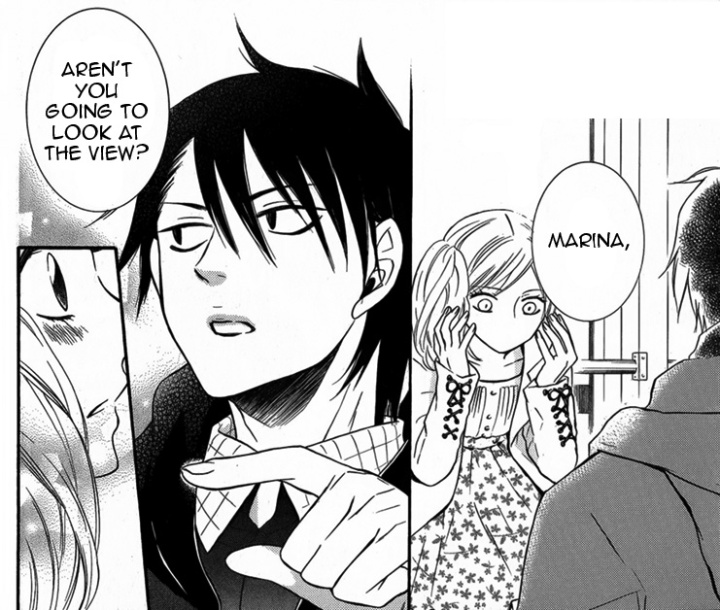 Rina is surprised. “You know my real name?” she asks.  Youichi says, “We see each other practically every day, so why wouldn’t I know your name?” Rina swings around to look at the view and to hide her blushing face. Rina thinks about how unfair the situation is.

In the other car, Yuuto has his head in his hands mirroring Rina’s gloominess. Hayate wonders if he’s angry and she can’t stand the silence. Yuuto’s beating himself up for his lack of self-restraint. He reflects on the time he came to the amusement park as a child with his parents and they had to leave before entering the park because his father got a call from work. Hayate crosses over to sit next to Yuuto. She’s sitting on her knees, nervous, but ready to listen.

She apologizes and tells Yuuto that she thought today would be more fun and that she thought Yuuto would like her outfit. She says she won’t dress like that again and the next time she’ll wear sweats. And then she turns and says that they should enjoy the ferris wheel and urges him to look at the view. Yuuto reaches around from behind and sweeps Hayate into a full embrace. He tells her that he’s happy with whatever she wears and that he was happy she got dressed up for him. He continues “Today… my mind was in another place… I was the one who was behaving poorly. I’m sorry.” And then adds that he somehow tolerated what happened at the haunted house. He thanks Hayate for helping him make fun memories, and then he says, “so pretty.”

He strokes her wig. Hayate loses her cool and tells Yuuto to concentrate on the view. She wonders to herself whether Yuuto was talking about how pretty the view was or something else.

One thought on “Summary: Seishun Away Chapter 9”