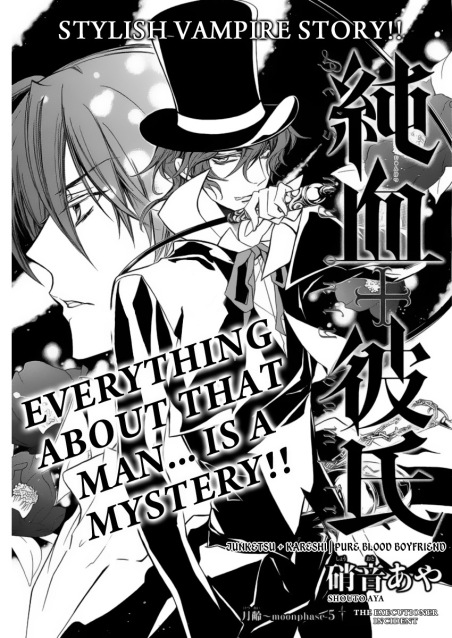 Here is “Junketsu + Kareshi” Chapter 5!  The cliffhanger from chapter 4 is resolved very unexpectedly, and now it makes me wonder what direction this story is taking.  I like that I was surprised in this manner, though, because what happened took courage to do.  It’s definitely not cliched :).

On the matter of Aki — I feel bad that no matter how hard he tries, hypnotism does not work on Kana.  That said though, Aki really is quite possessive and generally sinister.  But the end of the chapter I was wondering whether he continues to be the underlying cause of Shiranui’s problems at school.

Kana does seem to be a perfect balance for Aki.  She accepts his nature and approaches him head on (perhaps that is why Aki is unable to hypnotize her).  I think it’s interesting the way she thinks of her role as “Aki’s” and how she is able to conduct her life normally while assuming this role.  But what exactly does Aki want? and why doesn’t he realize what he already has?  In this sense, Aki is very much like a infant dependent on Kana as a mother.  Hahaha!  Aki has a lot of growing up to do!  I kind feel bad that Kana x Shiranui isn’t the focus of the story.  I really like Kana and Shiranui together.  She makes no judgment about his tendency to brawl and she seems to accept that’s part of him.  That’s pretty amazing, but at the same time just rolling with the situation does bring about peace of mind most people can’t have.

Enough of my rambling ;p.  Next up is “Magnolia” Chapter 5 followed by “Orange Chocolate” Chapter 20.  Also new under ongoing projects, the “somethings new” have been added!  We will begin the series “Yukarism” and “Yuurei Apaato Kanrinin” toward the end of this month if there is time!  I thought I was going to start “Jiu Jiu”, but when I looked at it amongst the series we already do, somehow it felt redundant.  I’m still looking for a good home for “Pika Ichi”, but until that home is found we will continue it.