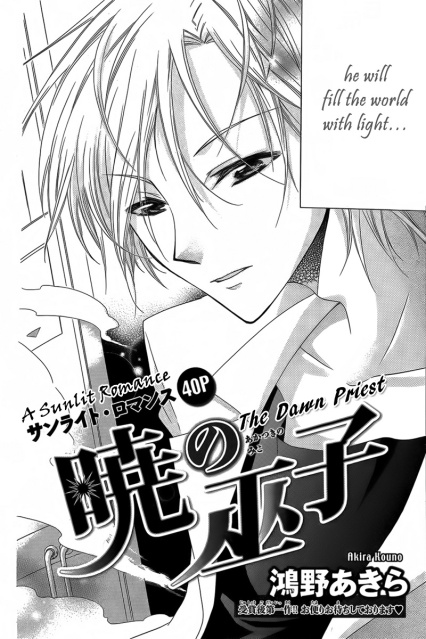 It’s best not to think too hard about the “science” and the “artificial sun” in this one-shot.  Just take things as they are and you’ll be rewarded with something cute.

This one-shot was on the bubble because I don’t like the mangaka’s drawing style and the character development seemed shallow.  But it was kinda sci-fi-ish, which is hard to find in shoujo manga, so I included it.

Ah…about the word “Miko”…this was kinda weird because Miko are women. But the mangaka used the form that didn’t have the “woman” kanji, so I just went with “Priest” since this is a fictional world and there is a  “science” vs. “religion” theme running through the story.  On that note, the “science vs. religion” aspect of the story is kinda neat and it’s too bad that matter wasn’t dealt with more deeply in this one-shot.

And now onto the link!

Up next will be “Magnolia” Chp 23! Get ready for some “quality time” between Ayato and Hugo. Nagi fans, get out your rags to chew!