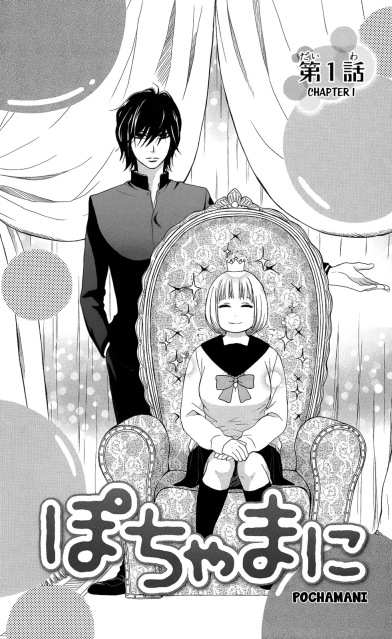 As you may or may not know, Pochamani is getting a longer run in Hana to Yume magazine.  However, if I read the message correctly at the end of chapter 6, chapter 7 is planned to be the last chapter

This first chapter covers how Tsumugi and Tagami became a couple.  It’s a very honest chapter and I appreciate how well the mangaka understands Tsumugi’s feelings of self doubt.  I think we’ve all had similar feelings regardless of our circumstances.  I know I have.  It’s hard to allow someone to love you when you’re not really sure you love yourself.  I also like the way the bullying was handled very quickly. It’s not like we couldn’t guess that Tsumugi was bullied, so I don’t think the story needed to dwell on it.  I am concerned, though, now that the series is going to be extended that some skinny-bitch will enter the scene and bully Tsumugi.  I hope nothing like that happens.  I would be disappointed if it does.  I hope the mangaka and her editor are smarter than that.  I think the health issues and the negative factors of being overweight in Japan would be much more interesting than another high school bullying manga series.

About Tsumugi’s weight; I have to laugh, because from my perspective as a American, she isn’t what I’d call “fat.”  She’s what I’d call “healthy.”  You know, she could go a little while without eating, but she’s not unusually fat. She’s just a little fluffy. Seriously, there’s still plenty of room left in the chair she’s sitting in on the frontis page. More than anything, she’s short, and that’s the weird contrast I see visually between her an Tagami. Anyhow, if this is considered “fat” in Japan, then Japanese people must weigh 2-lbs wet. Honestly, I think Tsumugi would be average in the US.

I’ve rambled on long enough, so let’s move onto the release!

Next up! will either be “Ore to Atashi no Kareshi-sama” chapter 2 or “The Ghost Apartment Manager” chapter 10.  It’s a matter of how soon I get back some redraws :).  Expect one or the other to be release next week.