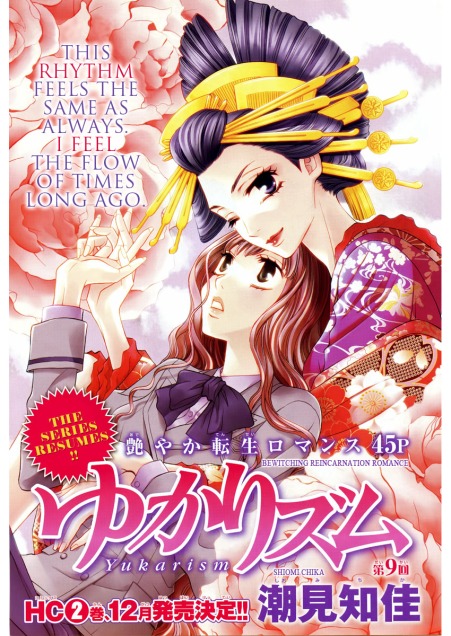 “Yukarism” resumes with a beautiful color page.  The title says the chapter is 45 pages, but it’s only 37 pages.  I guess the chapter is shorter than what was expected or negotiated.  It’s kinda surprising considering that the series was on hiatus for three months.  Oh, well…

This chapter has a sad flashback to Yuumurasaki’s and Kazuma’s childhood and ends with a launch pad into what takes place in the past in Edo between Yuumurasaki, Kazuma, and Takamura.  There’s an interesting little historical nugget added to the story (be sure to read the translator notes).  I wonder if this was put in to foreshadow the path of the story or whether it’s another attempt to misdirect the reader.  There’s a lot of worrying about Yuumurasaki getting ill.  In the present time, there’s more of the Mahoro x Satomi hate comedy.  Somehow, I feel that their hatred is good natured — like rivals who respect one another.  I guess we are still waiting to see the true nature of the characters’ opposition in the past.

Also, here’s a quick wallpaper I made using one of the pages from this chapter:

Next up is the first chapter of the continuation of “Akagami no Shirayukihime” in Lala magazine.  It’s taking longer than expected to prepare because it was a tough chapter to redraw and translate (still refining the translation — Sorata-sensei’s “word salad” is in full effect).  It should be done by the end of the week.